A tale of two landscapes: Designing restoration scenarios in Brazil and Scotland 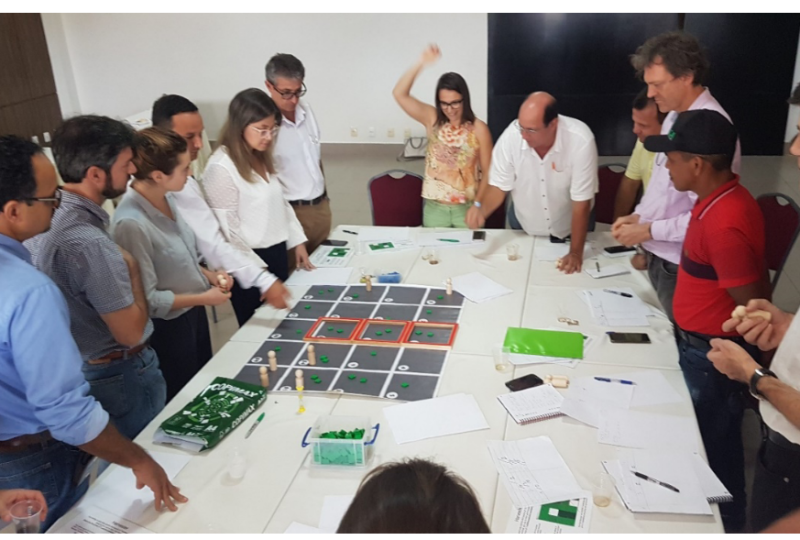 Figure 1. Workshop participants in Paragominas around the REHAB game board

Lana Coste, intern with ONFI and contributing to Forland Restoration

The application of the FORLAND[1] decision-support tool in two very different contexts – Brazil and Scotland – supported the design of forest landscape restoration scenarios based on participatory approaches. From this experience, we draw key lessons and explore avenues for improvement.

Over 100,000 people live in the municipality of Paragominas, which spans 2 million hectares in the state of Pará. Once on the red list of municipalities with the highest rates of deforestation in the Amazon, the landscape of Paragominas has suffered degradation and fragmentation. Local authorities sought our support to develop restoration strategies. Using FORLAND, we proposed several scenarios, including an ambitious ‘redesign scenario’.

Scotland’s Galloway and Southern Ayrshire Biosphere (GSAB) is a UNESCO reserve of about 550,000 hectares comprising agricultural land, dairy farms and conifer plantations, as well as natural habitats with conservation-oriented activities such as mixed forests, heathlands and fragile ecosystems (mostly peatlands). In this context, where tensions often arise over the balance between economic development and biodiversity conservation, FORLAND offered a democratic decision-making process that led to the development of a landscape vision and management plan.

An adaptive tool that responds to local challenges

FORLAND was applied differently in the two sites, based on their specific needs and objectives.

In Brazil, the process was organised around the development of an agreed set of ‘land suitability’ indicators (strictly-speaking ecological indicators, but aimed at supporting decisions about land use allocation), which reflect the capacity of each area in the landscape to increase carbon storage, reduce land erosion, and maintain biodiversity. These indicators were then used to assess the proposed redesign scenarios, thereby allowing decision makers to choose the best options.

Through a series of four workshops (the fourth to be held virtually due to COVID-19 – date is pending) featuring board games and scientific methods, stakeholders in Brazil were invited to express their visions of the future landscape, understand one another’s goals and constraints, suggest pertinent indicators, and debate the pros and cons of each proposed scenario. The main strength of the FORLAND process at this site was the modelling of scenarios describing possible futures, based on a set of modifiable parameters (hence representing a ‘vision’). For example, one parameter was the highly strategic forest biomass threshold, which allowed the model to propose either the conversion of degraded forest to agriculture or the initiation of restoration activities. Such scenarios can be visualised and assessed against the ‘land suitability’ indicators, according to users’ preferences.

In Scotland, the initial plan for a series of four workshops was also revised due to the pandemic: the third workshop was held online, and the date of the last workshop is pending. There was more emphasis on participation than in Brazil, and as a result the initial stages in which stakeholders developed their 30-year visions led to the creation of detailed written representations of the landscape and its various features by our Scottish partners. A graphic design company then produced a visual adaptation of this future landscape, which was found to be particularly helpful in stimulating discussions among stakeholders and which validated the process. 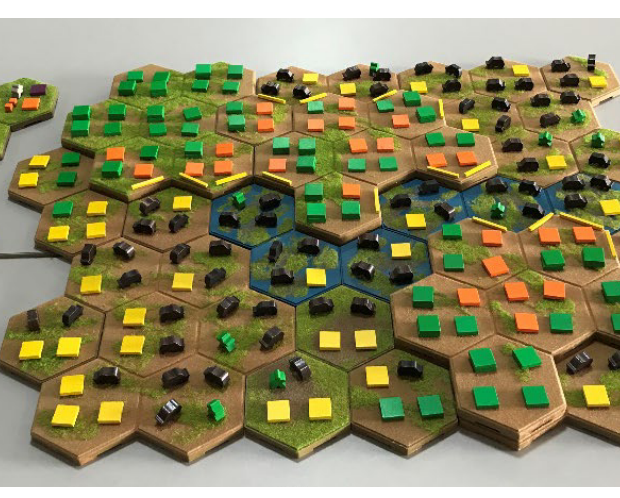 We provided two additional services in the Scottish case. First, out of the discussions in the workshops we produced a scenario based on a customised decision tree, then validated this scenario through a survey and online workshop among stakeholders. Second, we undertook participatory mapping based on a functionality developed on the digital platform that allowed individuals to visualise the landscape and add suggestions directly to the map regarding good management practices vs. those that could be improved. An analysis of these inputs allowed us to further develop this scenario and to give it more legitimacy. 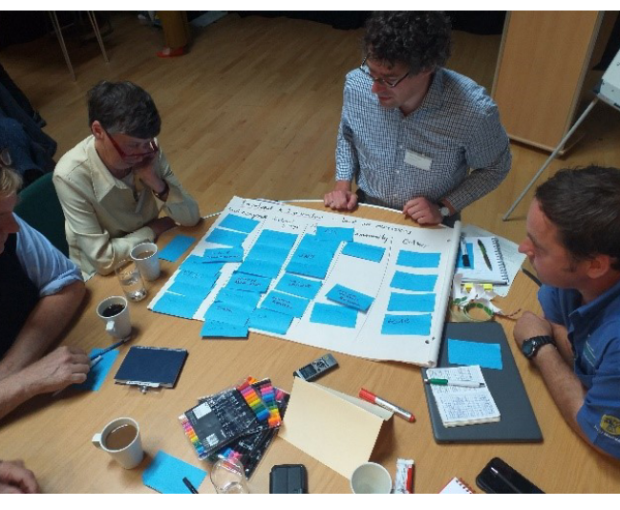 Our experience in both sites gave rise to two main observations:

First, ‘participation’ can mean different things in different contexts. The Brazilian process was driven more by experts and local authorities, whereas in Scotland a wider variety of stakeholders were invited to shape the scenarios through a bottom-up approach by indicating directly which land uses should be given prominence or dismissed. And although the stakes and context differed between the two sites, the implementing partners also played a significant role in shaping the process. Time and budget limitations also shaped the types of decisions, in terms of the application of FORLAND and use of the digital platform.

Second, the methods used to design scenarios must be adapted to the context. While scenarios were developed in both sites using a decision tree based on a set of parameters, the level of involvement of stakeholders in the selection of the scenarios differed. One approach relied more on parameters to define land uses (e.g. biomass thresholds), while the other gave more room to stakeholders to frame the decision tree more directly around land uses (e.g. reducing the amount of commercial plantations). In Brazil these parameters could be visualised and their outcomes compared using maps or graphical dashboards. However, to keep the method clear and accessible to the clients, no mathematical optimisation was involved (e.g. for maximising economic return or forest cover under constraints). This allowed more control of the process and the presentation of more options, but could risk missing a ‘best’ scenario – an elusive concept, though, due to the many stakeholders and issues involved. 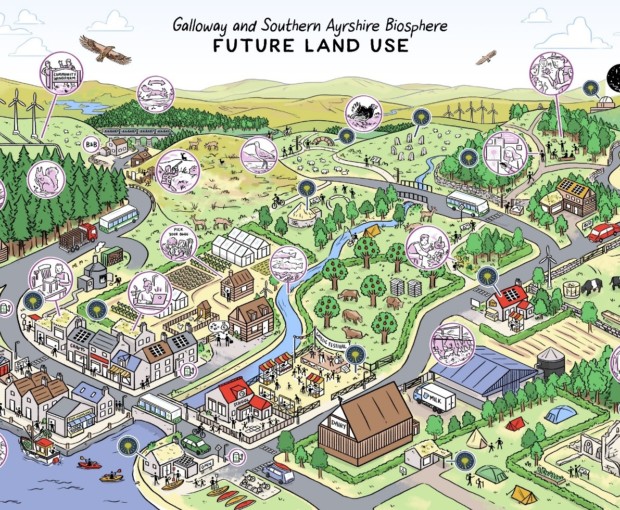 Striking differences existed in the two cases in terms of people’s approach to using FORLAND. In Brazil, proposed scenarios could be assessed against the predefined ‘land suitability’ indicators (carbon, land erosion and biodiversity connectivity), thereby validating the modelling. In Scotland, however, stakeholders placed more importance on agreeing in advance on a vision and on preferences for given land uses (and their intensity). These preferences were captured in the decision tree rules, and the assessment of the scenarios relied on their spatial representation. Thus FORLAND allows the client or user[2] to choose whether to favour stakeholder inputs or modelling.

Taking the best of both approaches and exploring new avenues

Participatory processes and the design of landscape scenarios support each other. Most important is to ensure that: (i) they complement one another, and (ii) they match the user’s objectives. FORLAND’s experience in these and other cases can inform future clients and users, but other leads should also be explored. First, science-based decision-support tools with maps of relevant indicators (e.g. biodiversity or carbon) could be simplified and made more accessible to speed up processes and lower costs. Second, more socioeconomic aspects could be introduced to broaden the evidence base that supports decisions; environmental issues are critical but other considerations also matter, such as gaining support from the population over the longer term. Third, scenarios could follow the promising approach of mathematical optimisation under constraints, which is trickier and more time-consuming in a spatially explicit context, but which can be an excellent tool for decision making at the landscape level (yet in essence providing less space to stakeholders in their determination).

Now we invite future clients and users to challenge us with their ideas, so that FORLAND can evolve even further!

[1] FORLAND is a decision-support tool for integrated landscape management that offers tailor-made solutions for each client’s particular needs and objectives. FORLAND Restoration is a project funded by Climate-KIC, the European Union’s main climate innovation initiative, in which the activities described in this article were developed. This work was done in partnership with CIRAD, ETH Zurich, ONFI and the University of Edinburgh.

[2] We distinguish between ‘clients’ and ‘users’ because the funder is not necessarily the user (e.g. in this case, funding is from the European Union but the actual users are local institutions).